The Taj Mahal at Agra 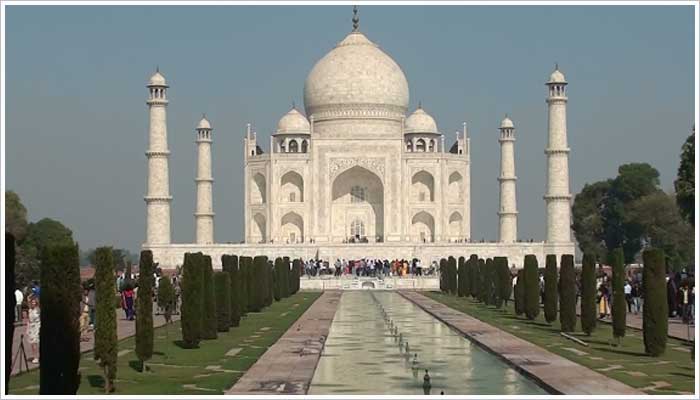 Today we travelled to Agra to see the Taj Mahal, it's only a 127 km journey but on Indian roads and with the rush hour traffic in Delhi, that equates to a 3 hour car drive from the hotel. After a good (but short) night’s sleep, we had an early start leaving the hotel just after 7am, arriving at Agra just before 10 to be greeted by Manish from Stoneshippers and Javed our tour guide for the morning.

Although this trip was about seeing the stone quarries & factories, it was nice to do a bit of sight seeing as well. We couldn't of come all this way and be within touching distance of one of the Seven Wonders of the World, without coming to see it. It just wouldn’t seem right…

Javed was excellent and certainly knew his stuff on the history and architecture of the area (going into the tiniest detail on every part of the Taj Mahal and the many surrounding buildings). This was where my first lesson in stone started and it gave me an opportunity to look at Indian stone in India!

Many of the buildings and pavements in the Agra area are constructed with local sandstone known as Agra Red. Although this is vibrant in colour, it is exceptionally soft and porous sandstone which is not suitable for paving in the UK. 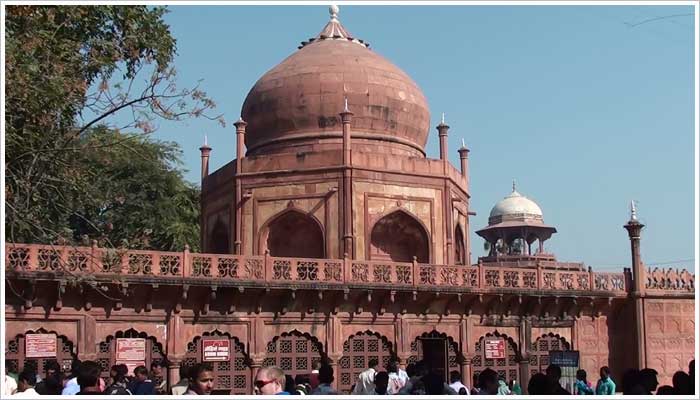 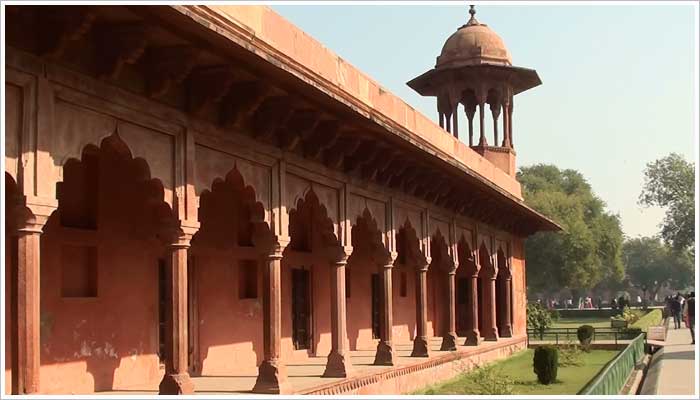 The Taj Mahal is surrounded by significant gardens and a number of other buildings including a mosque and guest houses which make up the 17 hectares of land within the complex walls. 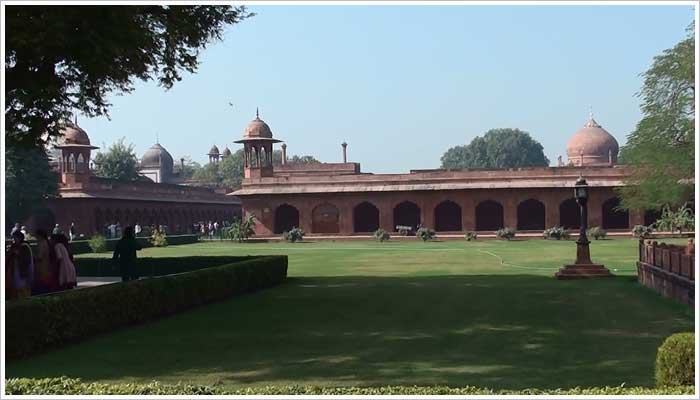 The majestic main gateway leading to the Taj Mahal is a large three-storey red sandstone structure, completed in 1648, with an octagonal central chamber with a vaulted roof and with smaller rooms on each side. The gateway consists of lofty central arch with two-storeyed wings on either side. The walls are inscribed with verses from the Qu'ran in Arabic in black calligraphy.

The small domed pavilions on top are Hindu in style and signify royalty. The gate was originally lined with silver, now replaced with copper, and decorated with 1,000 nails whose heads were contemporary silver coins 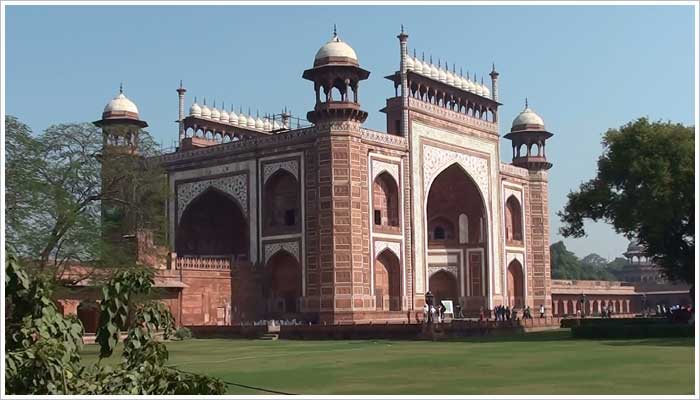 The main gateway of the Taj Mahal is one of the five main elements of this magnificent monument. Adorned with Hindu motifs, the Taj gateway is a tall niche doorway in the shape of an ogival arch that rises till the mid-height of the structure. With a vertical symmetry, the main gateway of Taj Mahal stands bordered with Arabic calligraphy of verses from the Quran, made up of black stone. An optical illusion is brilliantly at play here as the size of the letters has been increased in such a way that it all seems consistent all over the arch from top to bottom. 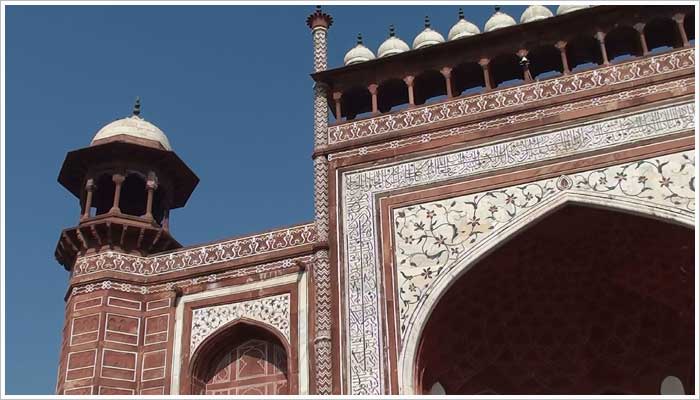 It was done by gradually increasing the size of the letters in a precalculated manner as their distance from the eye increased. Also, part of this gateway are octagonal towers that stand on the corners and are surmounted with broad and open domed kiosks and a heavy door made up of eight different metals at the base that are adorned with knobs 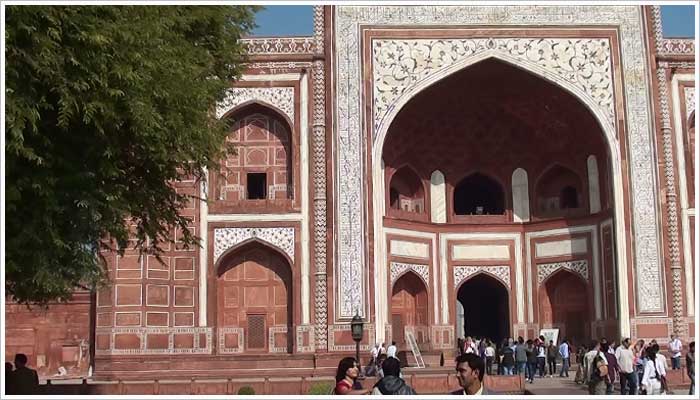 Javed our tour guide insisted on me having this photo taken looking like a tea pot which I am told is obligatory on any visit to the Taj, I must admit he got the position of the camera spot on. 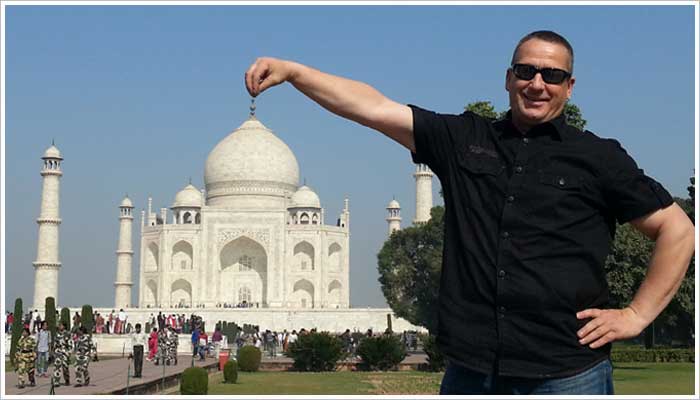 The Taj Mahal is a tomb built in the 17th century by Mughal ruler Shah Jahan in memory of his wife, Mumtaz Mahal, It is in the city of Agra, Uttar Pradesh, Republic of India and is widely thought of as one of the most beautiful buildings in the world and is one of India's biggest tourist attractions.

Mr Chis and myself with the Taj Mahal in the background 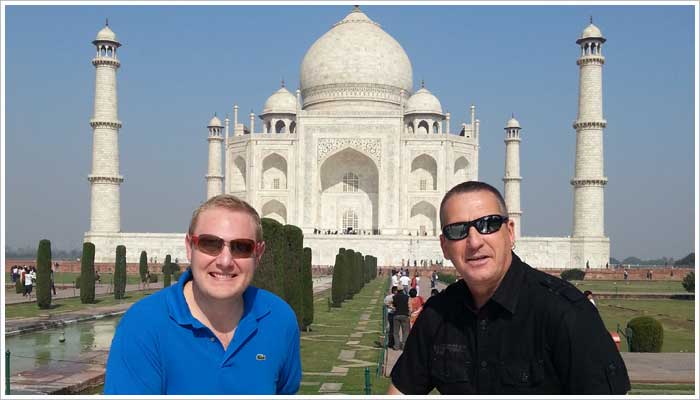 The Taj Mahal was absolutely breath taking. The sheer size of this wonder of the world, with its beautiful architecture took 22 years to complete with a work force of 22,000 people. All the inlay work of the semi-precious stones, painstakingly carved by hand into the marble is just second to none. You just cannot comprehend that all of this was done by hand.

The Taj Mahal is a white marble mausoleum located in Agra, Uttar Pradesh, India. It was built by Mughal emperor Shah Jahan in memory of his third wife, Mumtaz Mahal

One of the things I didn't realise was that the Taj Mahal is completely symmetrical in all but one part. All four sides are exactly the same in every detail even the tomb of the queen is positioned exactly on the centre line of the construction. The only part that is not completely symmetrical is the King’s tomb which is to the right hand side of the queen. I’m sure, with his attention to detail being so accurate, the King turns in his grave everyday over that decision! 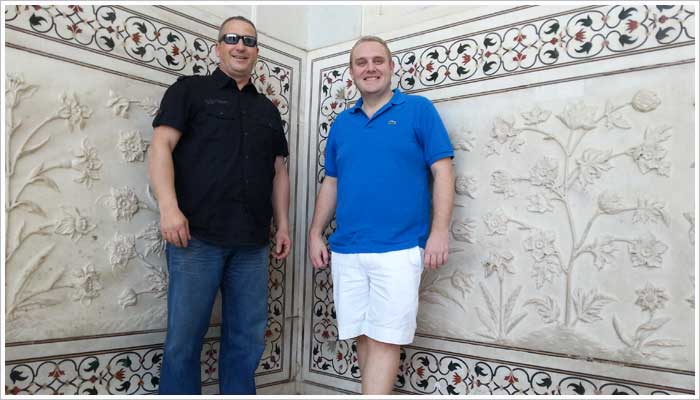 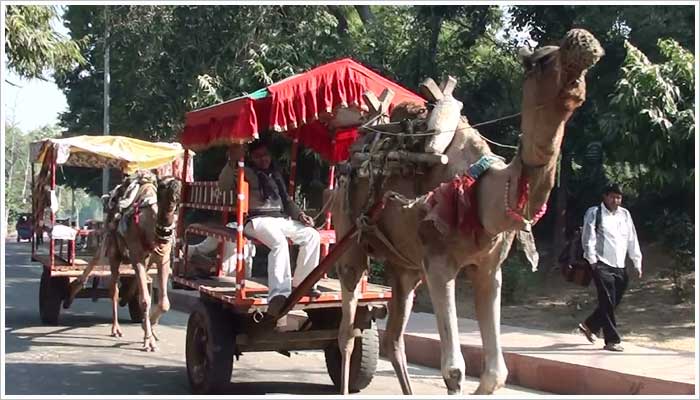 After a quick stop at a tourist shop where they made a pretty unconvincing attempt to get us to part with some cash for a marble table, we headed for some lunch just outside Agra before going on to Bharatpur train station for our 4 hour journey to Kota.

The Taxi rank outside the station in Bharatpur Jn. The 3 wheel auto rickshaw is a popular mode of transportation in India, often carrying up to 8 people. It’s quite interesting to stand and watch when a train arrives as all the drivers tout for a business. It got pretty noisy! 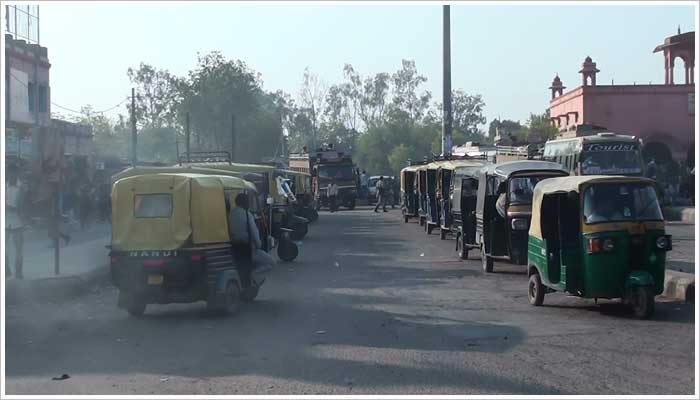 Manish and Chris ready for our 4 hour train journey, good job it was first class luxury travel, Chris also thought it would be a good idea to do his trick of balancing his red man bag on his head whilst I took the photo :-) 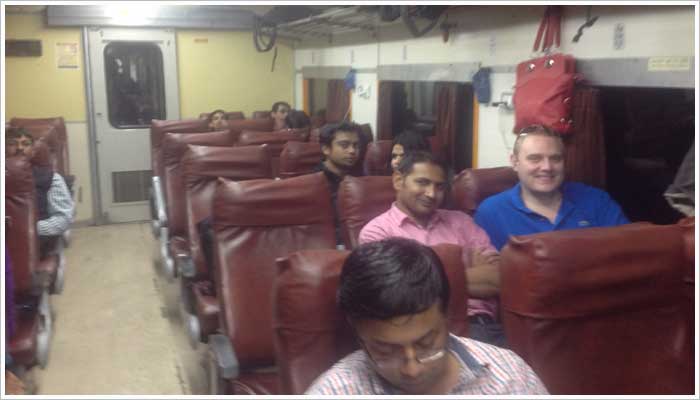 By comparison, the second class train carriage was very basic compared to our luxury first class travel facility! I’m not sure they were impressed to be on film! 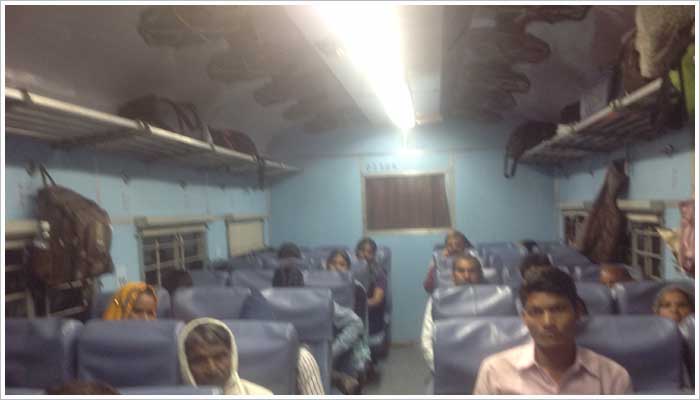 Anil the general manager for Stoneshippers was kindly waiting for us as we arrived at the Umed Bhawan hotel in Kota at about 8pm.

After our long hard day of sightseeing and travelling, a shower and that first pint of Kingfisher beer was well needed quickly followed by a few more