The journey took about 2 hours to reach the first quarry in an area called Hemnivas, which is one of the largest quarries in the area. This quarry produces grey block and slab stone known locally as ' Neela'. This is an exceptionally productive quarry which covers several acres and supplies expensive, but premium grade grey sandstone. It was only at half pace whilst we visited as in certain areas they were pumping out water left over from the monsoon season. I was assured that if we had gone back after Christmas this would have been a lot busier. 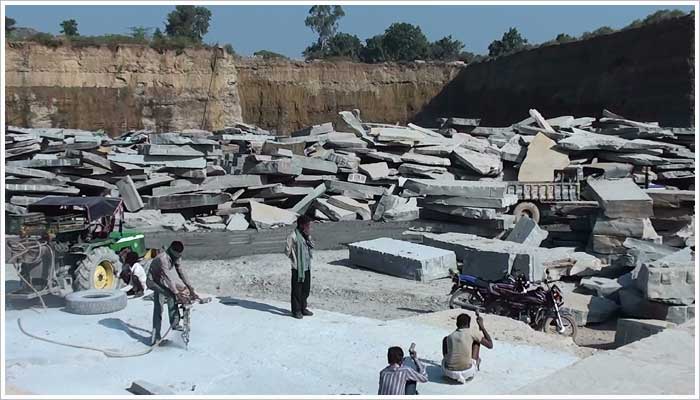 The majority of the output from this quarry is sold locally into the domestic Indian market. Only a very small percentage of material from this quarry is exported. It is, I was told, more expensive than many of the other grey materials as it splits very cleanly which is desirable for the local builders. From an export perspective, it is also quite desirable as the colour is also exceptionally consistent.

I was surprised initially at the size and scale of this quarry expecting the quarries to be small where they are chasing the seam of stone. This pit was huge with a very consistent colour throughout. We were told that they have a further 20 foot down before the seam turned to a deep red colour. The next thing that struck me is the waste and the yield that comes out of this quarry is quite low compared to the size of it. Because of the strata of the stone and the infrastructure in the area, the majority of extraction is still done by hand using stitch drills, hammers and cranes to pull the stone from the ground. I had expected there to be a few more quarry or wire saws taking block out cleanly. But, because this is block for riven paving, it is extracted in this way. 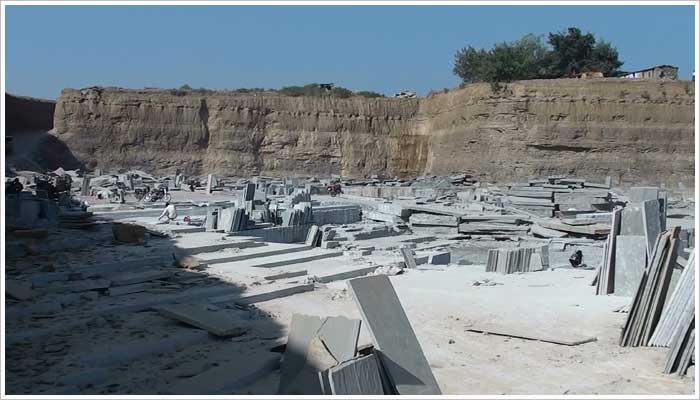 The riven paving is cut the the correct sizes using steel templates, these 2 stone masons are very quick and accurate with the cutting of the paving 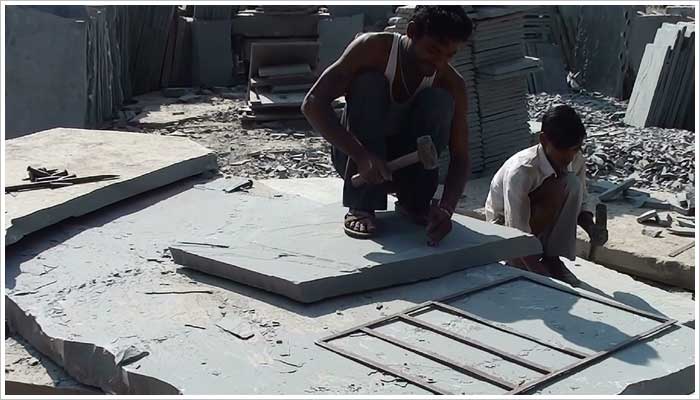 We then made the short journey to a quarrying area not too far from Hemnivas, where we saw a slightly different tone of grey, as well as brown and 'double colour’ block (silver with brown swirls) being extracted for sawn paving. Marshalls use material from this quarrying area for the Fairstone Sawn Autumn Bronze and Antique silver colours. 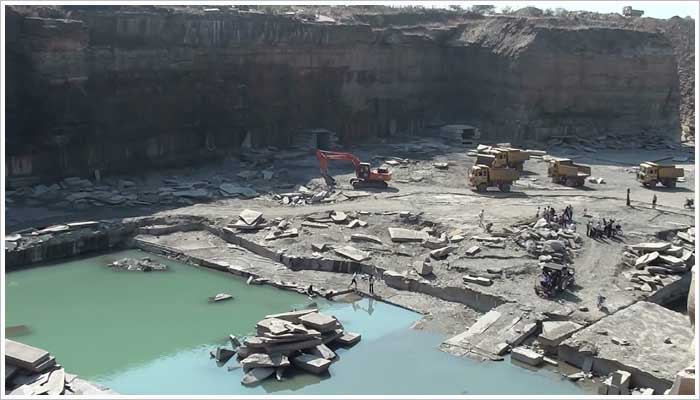 We then had about one hour’s drive to Stoneshippers own quarry. This quarry was a good distance from an area called Bijolia where there are many quarries and riven yards that supply exporters. As we drove through the Bijolia area we saw many crates lined up by the side of the road, ready to be collected.

Many importers into the UK and Europe don’t buy product from suppliers with premises like Stoneshippers. They buy from small riven yards and a lorry goes round collecting on a milk round before being transported by road to the docks to be containerised. 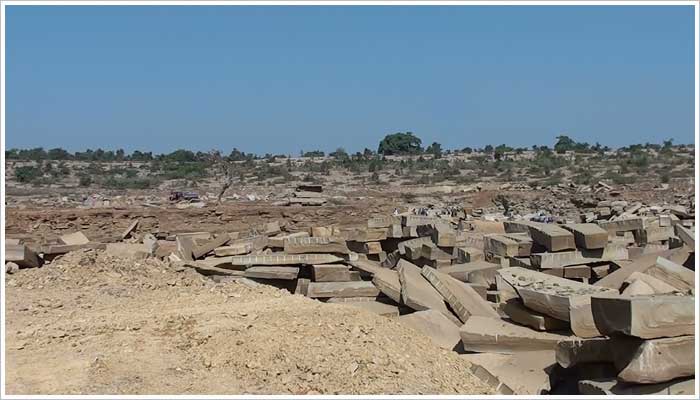 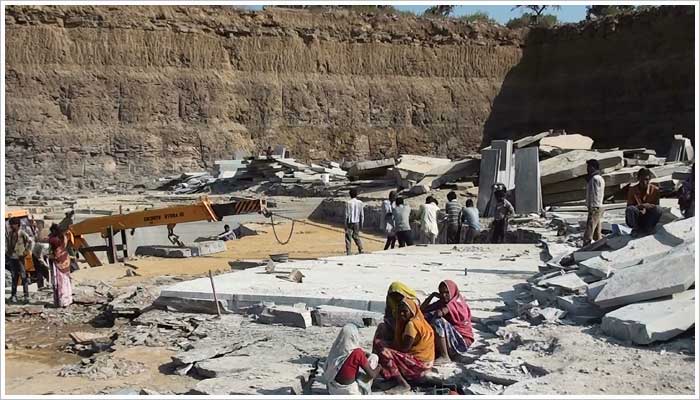 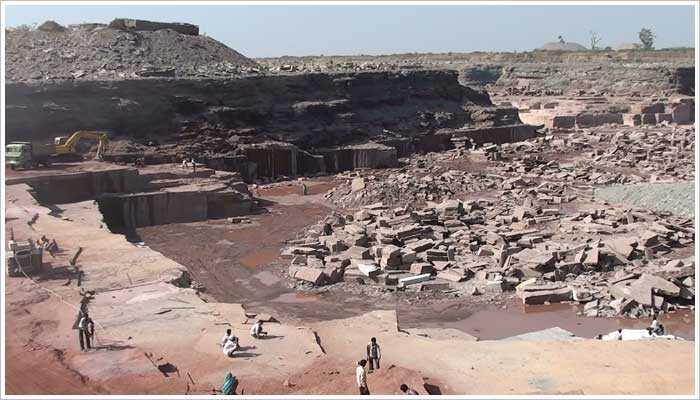 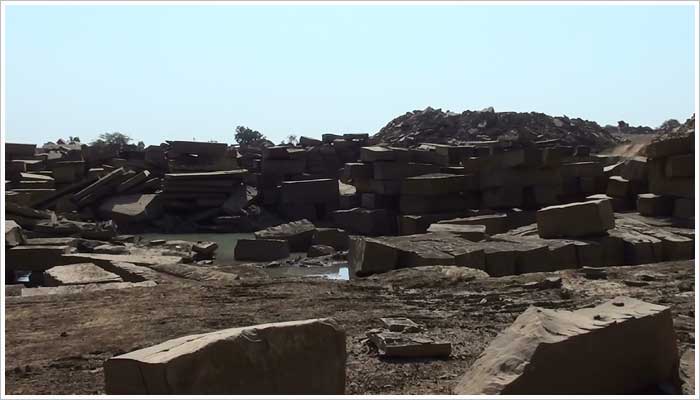 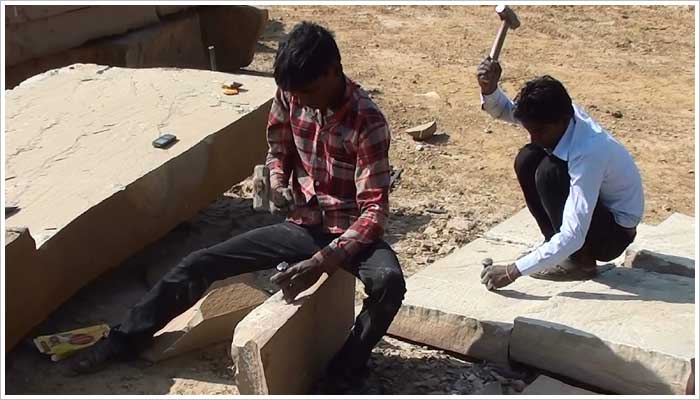 This is Stoneshippers quarry and as the seam is quite consistent and the block is used for Sawn paving, the stone is extracted using a diamond wire saw. Two holes are bored into the stone one vertically from the top and the other horizontal from the bottom until both the holes meet up then the diamond wire saw is threaded down the hole and connected to the machine. When the cutting is completed the large block of stone is extracted and transported by road to their Ranpur factory.

The process of block extraction then starts all over again. 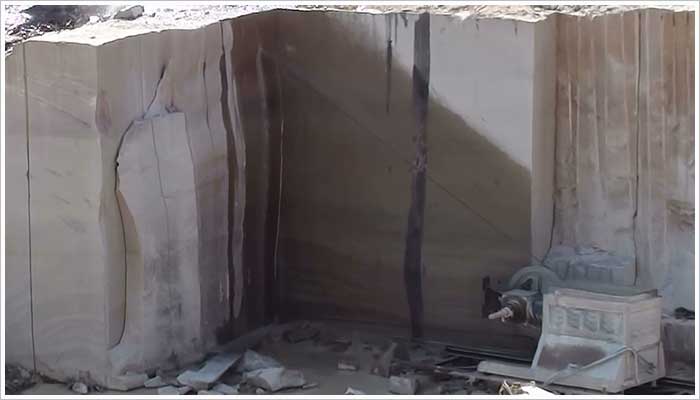 Core drilling the quarry to see what the stone formation is like, they are drilling down to a depth of 150 feet. This process is done to check the reserves and the colour consistency of those reserves. As this is a relatively new quarry, this type of core drilling will be done in several places in the quarry and the sleeves extracted and analysed.

This process will take about a month to complete. It allows Stoneshippers control over their supply of stone and to give an indication as to how long the stone reserve will last before they have to look for new quarries or seems of stone. 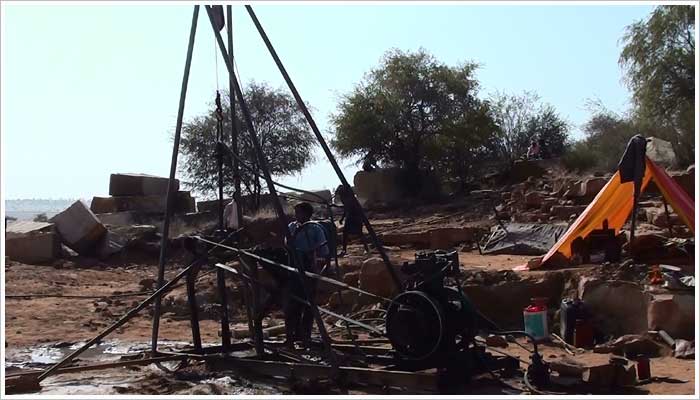 Another way to extract the stone from the quarry is to use a quarry saw on tracks. This machine performs a series of cuts along the surface before the stone sheets and blocks are stitch drilled and removed from the ground. 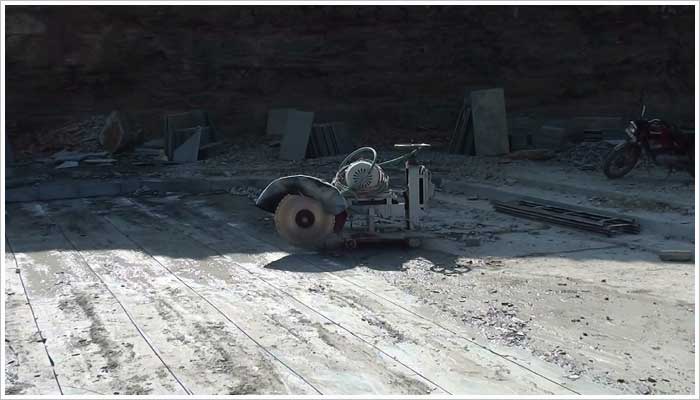 One thing that I did learn was there are many ways of extracting stone out of the ground. We saw several today, but depending on the stone type, the consistency of the face, the infrastructure and investment in the area and the type of block you need to extract, the method of extraction changes.

Below shows the face of the quarry that is being worked. In order to get this stone out, the masons have bored small stitch drill holes into the stone. These holes are then filled with a white expanding foam, that as it expands, creates a fault line along the stitch drill holes and allows the workers to pull the block out using a crane. 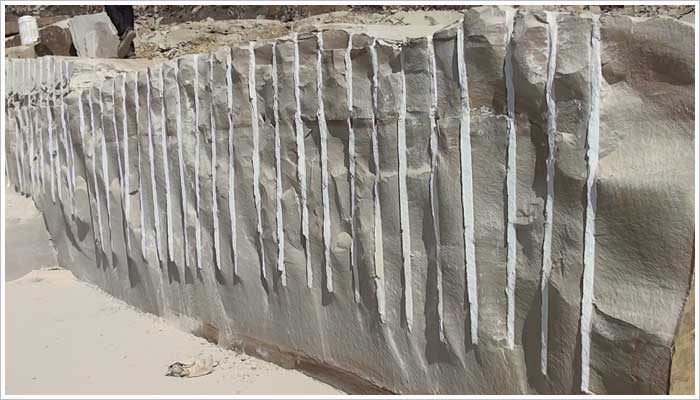 We had a enjoyable lunch on the hoof (which was prepared by Stoneshippers own chef- they did spoil me!) and we went on route to an area called Bohdpura. This area is famous for hand dressed sett making. We visited a sett yard to see the various size setts varying from 100mm x 100mm up to 200mm x 200mm mainly for the German and Belgium markets.

Although Marshalls don’t take product from this area, they were keen to show me round so I could get the full picture. This product has more than likely been collected from the spoil heaps of quarries locally, hand dressed and crated in the yards that we visited. There were plenty of children knocking around the area, but we didn’t see any working. I was told on plenty of occasions, children have been seen making setts in this area and I can quite believe it. I am told that a lot of the suppliers are wise to it now and as soon as a 4x4 with Westerners pulls off the motorway, the children are told to scarper.

Mr Saxenna told the story of one exporter in this area who has ‘Ethically Sourced’ on their sign post as you enter their yard, having children make setts in their yards right under their sign,  It makes a mockery of all the green wash on child labour by many people. I believe it happens, I have heard too much from too many people to suggest that it doesn’t, but with everyone claiming they don't take product made using child labour, someone clearly has no control over their supply and isn’t aware or are clearly lying.

However, I hasten to add in the few days I was in Kota, I'm pleased to say we didn’t witness any children working in any part of the supply of sandstone. 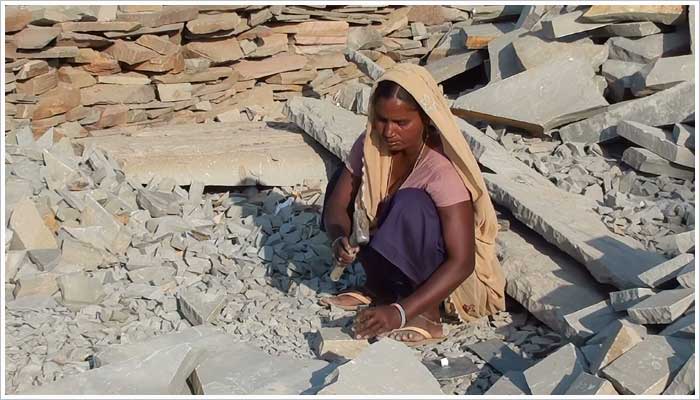 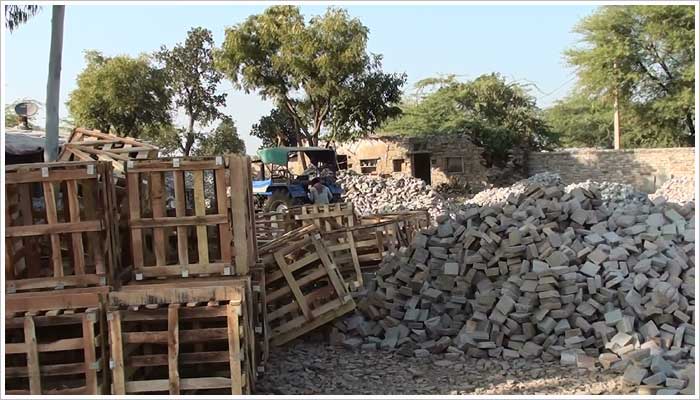 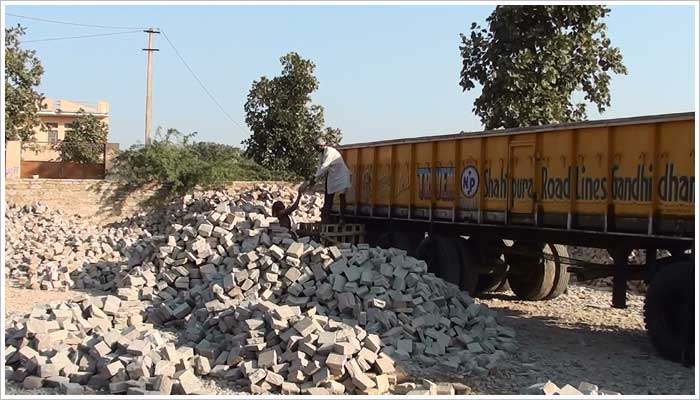 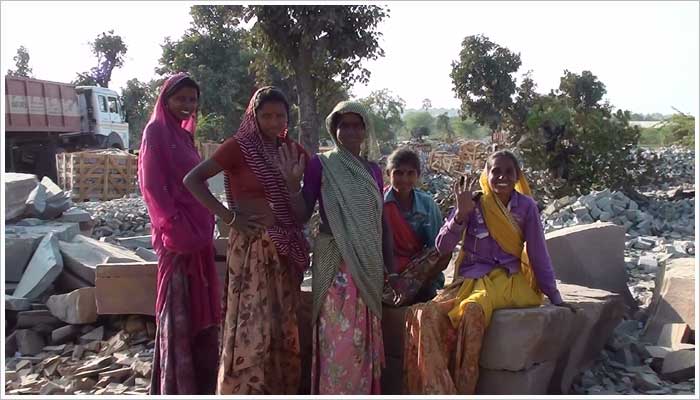 Our last visit of they day was on the Udiapur to Kota highway, where Marshalls were looking to source a stone for a potential new product for 2015 which I must say looked great and I am looking forward to seeing this in the Marshalls brochure

This quarry was on a similar scale to the Hemnivas quarry we visited earlier on in the day, but seemingly had many small masons working their own pockets of stone. 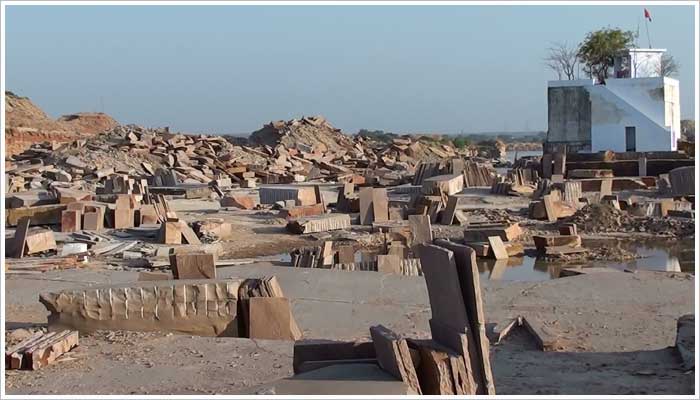 Another thing that has enlightened me over the past few days, is the amount of work that goes into the new product process at Marshalls. From checking out the supply and source for ethics and continuity of supply, to testing on the ground and in a lab, getting the products independently verified and the market research with installers and consumers. It has shown me that no stone (sorry!) is left unturned.

Chris talked at length to me about the process and how each year they are trying to improve it with all suppliers. It shows though that the products that Marshalls bring to market are technically good enough, but also they have enough of a supply to satisfy any demand. 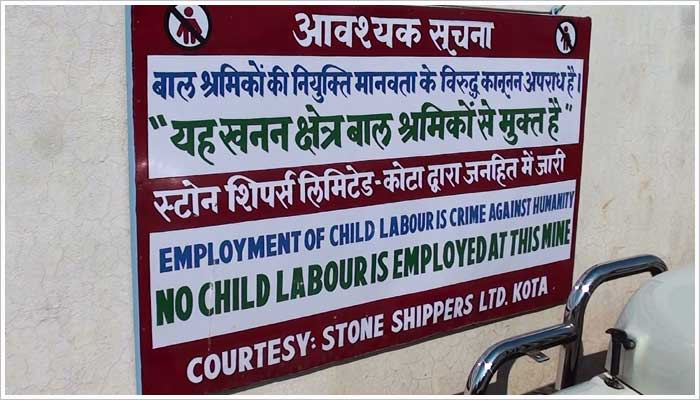 An example of the amount of stone blocks these lorries carry and not a single strap or piece of rope in sight, at a guess they must be a good 10 ton over loaded by UK standards.

On the road out of Kota, there are hundreds of these lorries or tractors all going at about 10 mile and hour because of the weight of their load! 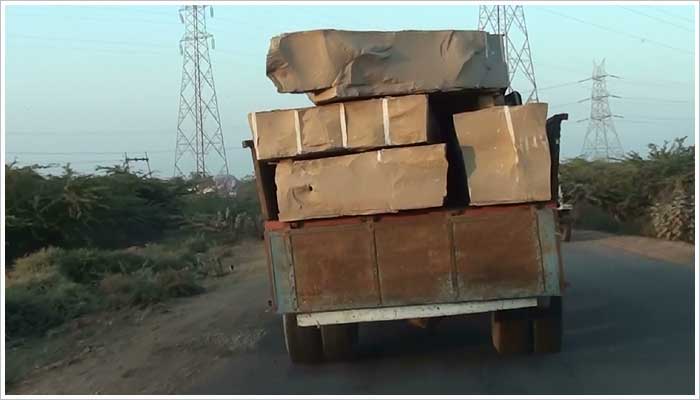 Imagine this on the M1 Motorway; you’re driving along nice and carefully when out of the blue you’re faced with a few cows leisurely walking towards you with not a care in the world, this is daily life on the roads and motorways in India. They have built all the infrastructure (ie roads and motorway networks) but the people still treat it as if it was a country road. Some of the driving is frightening at times. I felt like I was in a computer game dodging all the obstacles along the way. 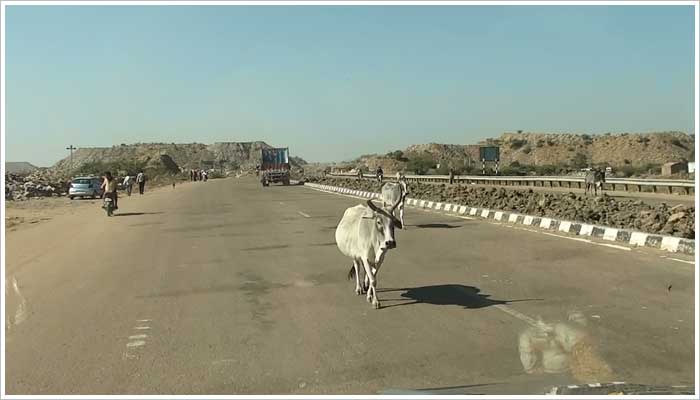 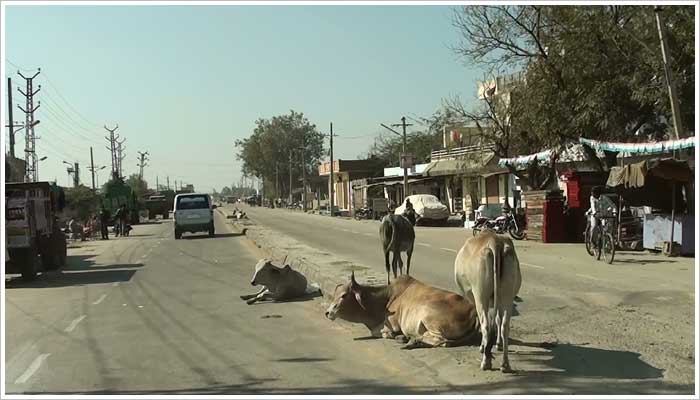 A regular occurrence to see cows laying down on the motorway minding their own business. This chap was totally oblivious to us coming towards him! 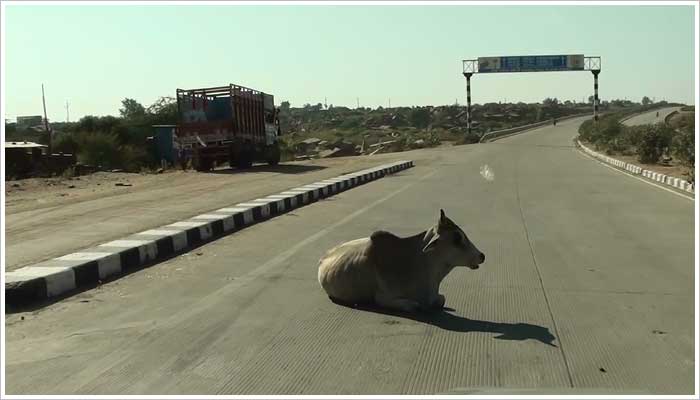 The motorways are relatively new in India and the planners have not taken into account of not having enough junctions to exit the motorway to come off or head back in the opposite direction. Actually, in India they are not needed because all you have to do is cross over to the opposite side and continue your journey on the other side of the carriageway! Absolute carnage. Now I appreciate why Chris said he wasn’t comfortable travelling after sunset as you really have no idea what is in the way or heading towards you. It might be a motorbike, a car or a lorry with a light out, two motorbikes carrying a wardrobe! Anything goes. The jeep in front of us is leading the convoy and is turning off the motorway in front of oncoming traffic. We had travelled over half a mile towards oncoming traffic and no one bats an eye lid as its considered normal driving practice. All you do is beep the horn loudly and at regular intervals and you are fine. I’m going to try it back in Bolton and see how far I get! 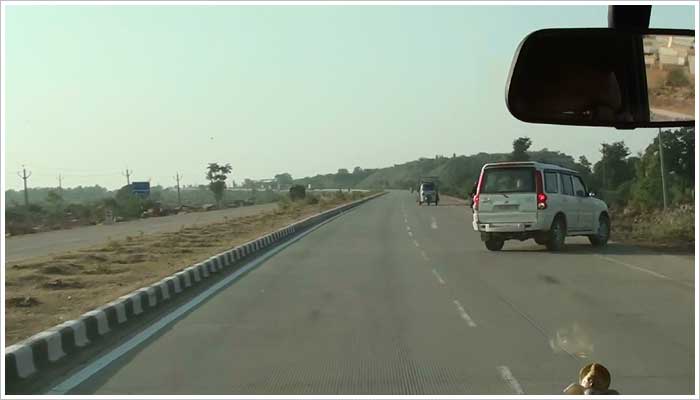 No need to worry as the traffic heading towards our jeep is forced to swerve to miss us. There was no fuss from the motorbike though, he just got on with it. 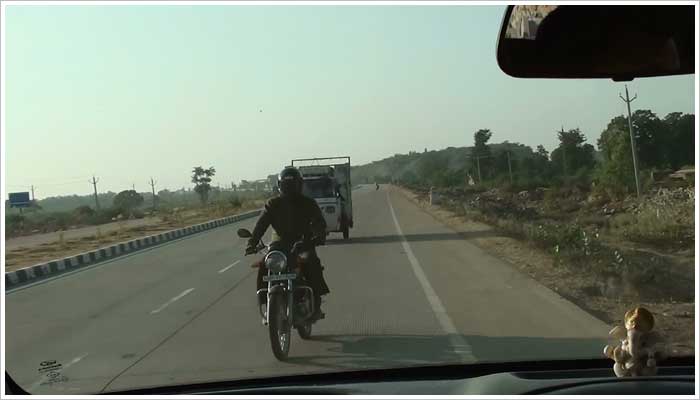