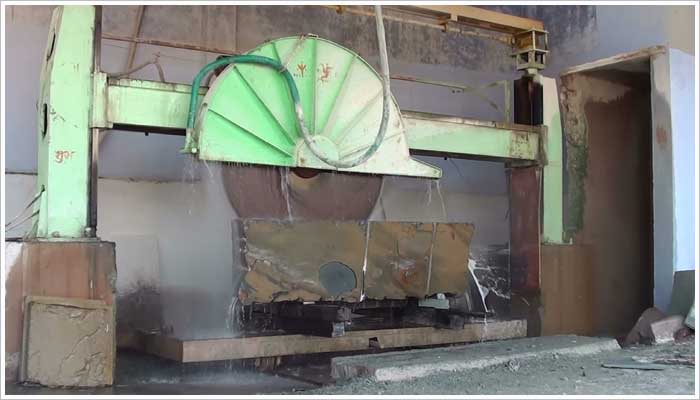 Whilst the majority of the trip was to try and understand what Marshalls do, I was keen to see what else was out there and potentially coming into the UK.

The Indian Stone market in the UK is full of companies all claiming to be the same and claiming to have the same products and I was hoping to see if those claims were true or not. It is hard to gauge what is what without having a look , so we went to several different processors in and around the Kota area that were exporting to some of Marshalls competitors in the UK and into the rest of Europe..

I was told that there were a couple of larger suppliers in the area which we wouldn’t be allowed into (understandably) but we had a drive around and went to several smaller ones where we could.

One thing that I saw almost instantly was the quality coming out of some of these factories was very poor. Attention to detail, dimensional accuracy, finishing, calibration etc was nowhere near the standard that I had seen at Stoneshippers Ranpur factory. It all looks the same when it’s packaged up in a crate, but what lies underneath with some of these products is horrendous.

I appreciate what we saw were not the bigger exporters and not everything that comes into the UK is made this way, but certainly a lot of the cheaper products we saw (Sawn & Riven) are most certainly not to the same quality that Stoneshippers were producing to and certainly not to the same quality that I would want to lay myself. But I appreciate that everyone has different standards and I only saw one small part of what goes on out here and I’m sure it’s not all as bad as some of the places I saw. 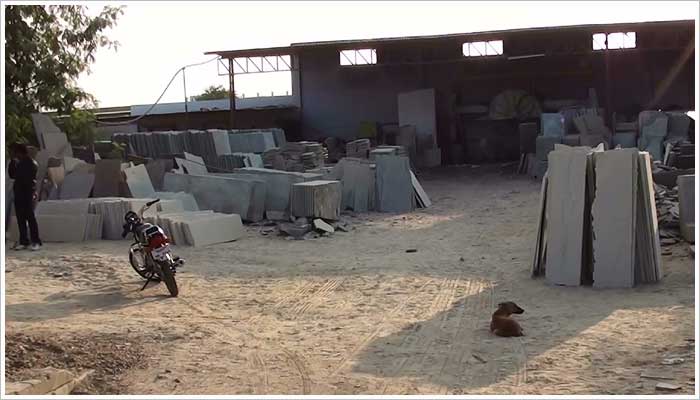 A mono blade stone saw cutting a large block of stone into slabs, I had just walked away from the top right hand side when there was an almighty bang, some sparks and the saw stopped working due to a segment coming off forcing the blade to be jammed mid cut 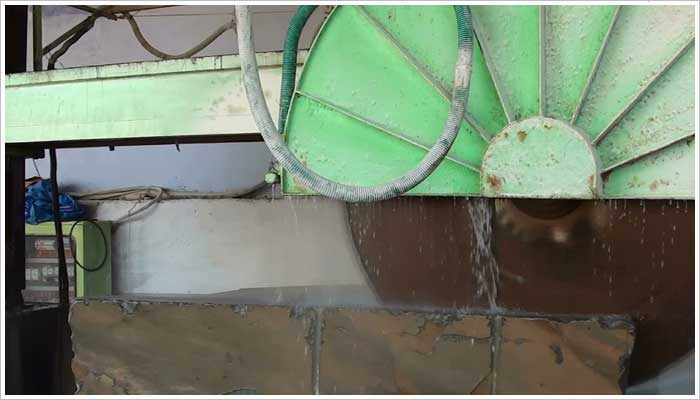 Stone calibration machine with a small blade, the operative moved the saw table from left to right and back again several times to remove the surplus stone each time moving the piece of stone appox 30mm to a new position.. It’s an alternative way of calibration but very time consuming and labour intensive. You also don’t seem to get a consistent thickness using this method. 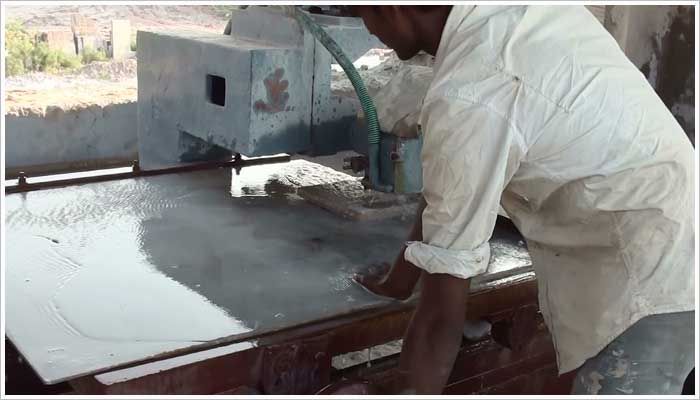 Another stone yard with products due for export to the UK, the standard of calibration leaves a lot to be desired but it's your personal choice if you choose to lay this type of product 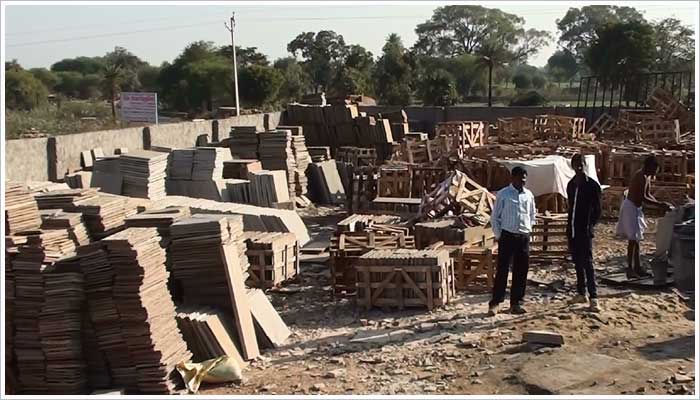 Stone saw used to make a series of saws cut to the rear of the riven paving so the surplus stone can be hacked off using a steel chisel. An alternative but, very primitive way to calibrate paving which doesn't leave a uniform thickness across all slabs. 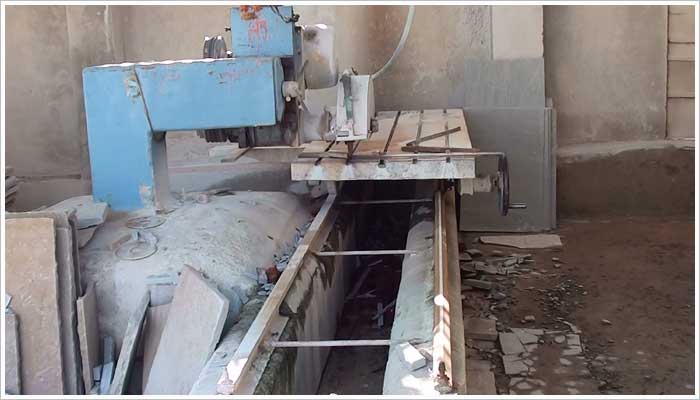 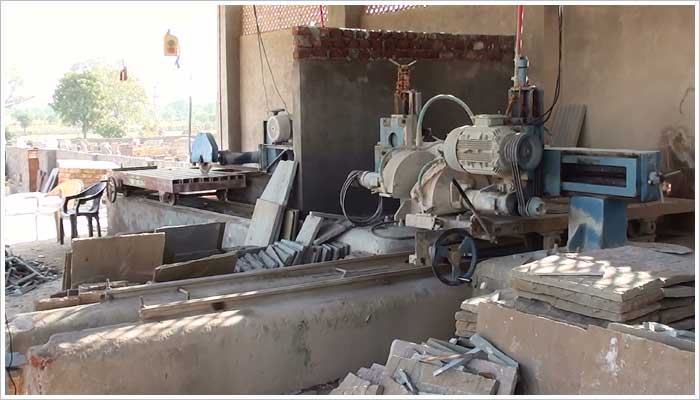 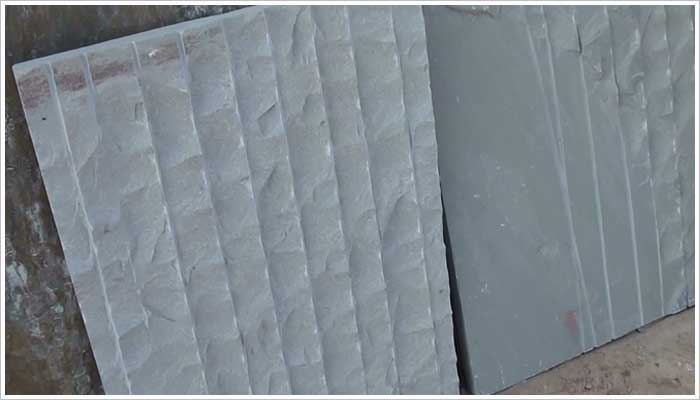 Believe it or not, this paving is destined for the UK market. Its horrendous the way they are calibrating the paving leaving voids within the stone when they have chiselled the surplus away and the final thickness well under 20mm in parts. But that's what you get when you pay cheap prices. 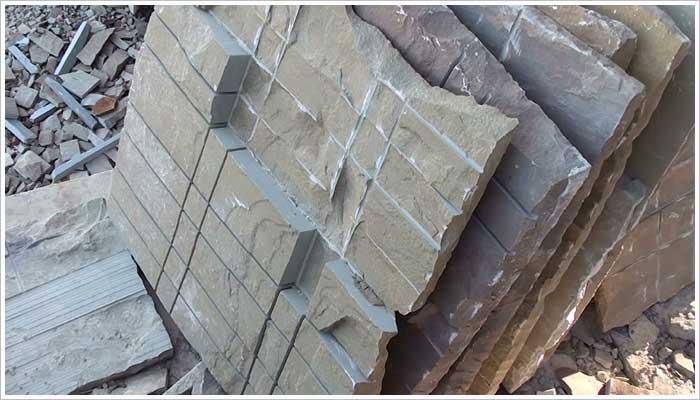 A series of saw cuts in each piece then stacked ready for the surplus to be chiselled away and passed over by a single bladed calibration machine.. 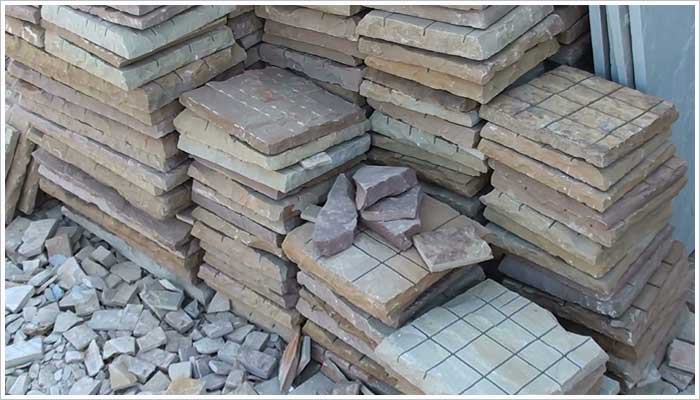 A finished piece of calibrated stone, the depth left after this process is very thin in places with fissures all over it which could lead to the paving either cracking in transit or failure when the paving is laid. This slab was in a crate ready for export to the UK. 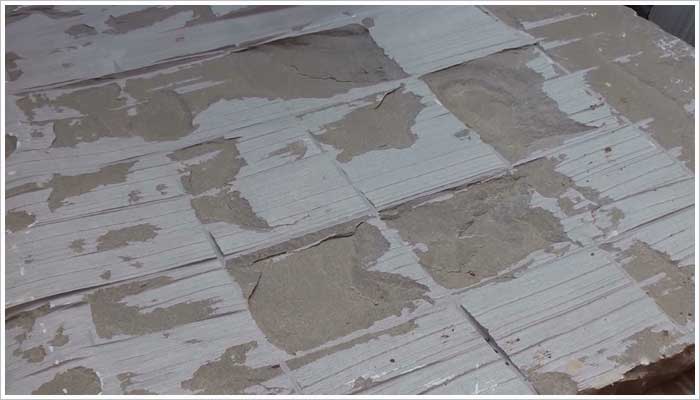 This is the sub standard quality finish that you might get when you pay cheap prices for calibrated Indian sandstone paving.

When you purchase riven paving at around the £16 m2 price just bear in mind that it could have been extracted from an illegal quarry, cut to size by poorly skilled masons who have not been paid the correct wage and put into a timber crate made from illegally felled trees. When you look close at it, not all stone products are the same and as they say "you get what you pay for".